Unit of the Day returns, detailing new units for Act of Aggression. Today we will focus on the whole Chimera’s infantry line-up.

Chimera is a quick reaction force under UN command. Its creation was kept a secret from other UN organizations, its very existence even only known to a selected few among contributory countries. For Chimera being a multinational force, it is drawing men and equipment from several countries. And its infantry is no different …

Chimera’s infantry roaster is the smaller of all three factions, for the UN strike force’s very harsh selection process only retains a few very highly trained individuals. They might be few, but are usually packing more firepower than their counterparts …

Chimera’s light infantry is equipped with the French combat system “Fantassin à Équipements et Liaisons INtégrés” (FELIN). Maybe not as tough as US Marines, FELIN soldiers have the advantage of speed over their counterparts (Contractor & Marines), granting them the ability to seize key locations (banks, defensive positions, …) earlier in the game.

Although quite good at that from the start, once upgraded the appropriate training, FELIN will become the undisputed close-quarter opponent, allowing them to clear buildings of any enemy presence in the shortest time.

Whatever country they are originating from, no sniper candidate may integrate Chimera without undergoing the unforgiving SAS training course first, ensuring that only the very best and fittest are selected.

All factions have a different approach to sniping: while US Army (Sniper) favors stealth and Cartel (Jackal buggy) high mobility, Chimera’s marksmen rely on firepower. Armed with .50 cal. AWP50 anti-material rifle, they can not only engage enemy personnel from afar, but also armored vehicles, unlike their counterparts.

Suited in an US Army’s HULC anthropomorphic exoskeleton, Exosoldiers are Chimera’s muscles. Just like Steve Austin, they can run faster and lift more weight than any unaugmented man alive.

Thanks to their suit, Exosoldiers are the fastest of all infantry units, and since they can lift more than others, they all carry a modernized version of the Belgian BRG-15 15mm machine-gun as a personal weapon. A deadly combination of rate-of-fire and caliber, capable of tearing any light armor apart, let alone any unfortunate infantry unit crossing their path …

One of their most useful upgrade is the ability to integrate automatic healing device in their suit, immediately treating their wound on the battlefield.

Grenadiers are Chimera’s fire support infantry. Forming a two-man crew, they are armed with a South-African Denel Y3 automatic grenade-launcher.

Although slow and requiring to set up their weapon before firing, Grenadiers are able to engage enemies at long range with salvos of 40mm anti-personnel grenades and are perfect to defend a position. Besides, those targets they don’t kill usually end up stunned, breaking the momentum of the enemy’s assault.

Besides, once upgraded with NLOS targeting system, they can engage targets even out of sight, thus doubling with a short-range mortar … 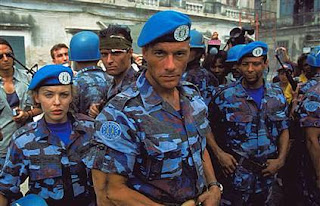